One thing that we're really trying hard to do is install lots of thoughtful updates.  Things that, especially in the kitchen, will just make life a little easier.  I have a little note on my phone, and I add to it every single time I think "I wish this house..." or "In my dream house...".  You'd be surprised how many times we've found that we can add a certain feature to our current kitchen.

Exhibit A:  the tip-out trash can. 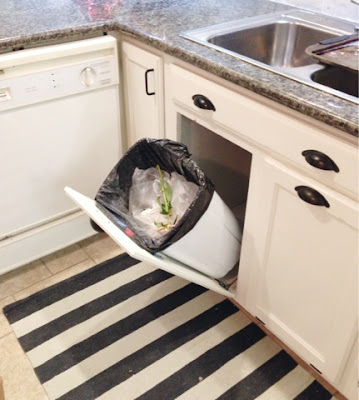 One thing that this house is sorely lacking in is a logical and convenient place to stash the trash and recycling.  Our city has a great curbside recycling program where we don't even have to sort the recyclables, and our recycling bin is the same size as our curbside trash can.  It's great!

But that means that we recycle everything we can, and I was spending a ton of time running out to the garage or to the recycling bin.  No buenos.

For a few years we had a standing trash bin, and then I decided that I hated the concept, and so we keep it under the sink.  When we remodeled our cabinets, I really wanted a trash system...some type of custom tip-out or pull-out trash and recycling.

I Pinterested around {totally a legit verb}, and found a few ideas.  This plan from Ana White {basically my hero} really caught my attention.  Rather than creating a standing unit, though, I modified it to fit our situation.

Really, it was simple.  Shopping for the perfect trash cans was honestly the hardest part.

So for starters, I installed the hinges on the bottom of the cabinet door, rather than the sides.  Had I just left it as-is, the door would fall to the ground when you opened it.  So I got super classy and busted out some child safety hardware that we don't use {because we like to live on the edge}.  I thought that it just might catch the edge of the cabinet, which would stop the door.  It worked!  Much better than having to find/buy/install some type of specialized hardware. 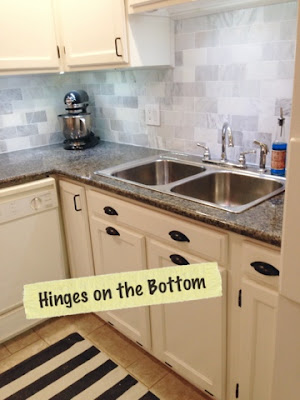 So at that point, we had two doors that tipped out and stopped, but we needed trash cans.  Like I said, this was the most challenging part.  Schlepping two kids in and out of Target, Wal-Mart, Meijer, and then Lowe's...I finally found the perfect size.

Next, we needed to attach the cans to the doors, so that the cans would tip out with the doors when they were opened.  First I tried Command Strips.  Sad to say, I use these things all the time and this is the first time they've failed me.  I guess the weight of our trash was just too much for even the heavy-duty stuff.  Enough said.

So Nic came up with this system of installing old brackets we had, and then hanging the cans on the brackets.  We used a screw that can be removed so we can take the cans out for cleaning.  Not exactly super-professional, but I think we get points for cost {free!}, and creativity. 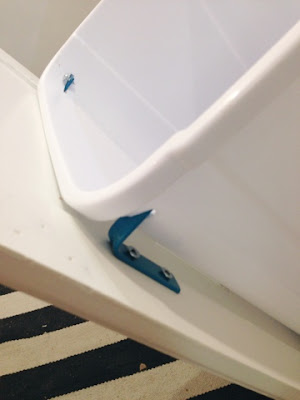 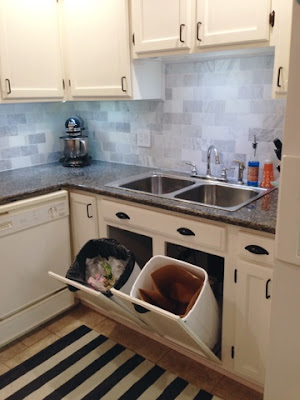